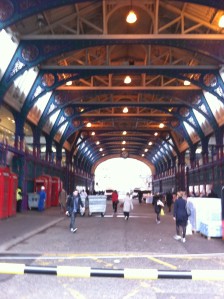 A great view of the grand arcade in Smithfield Market.  What will happen to it?  The controversy arising from plans to replace the General Market with a new office block focused attention on the destruction of a part of the market which was no longer in use.  The General Market is now subject to a redesign which will largely retain the existing building.  An interesting question is the long-term future of the main part of the market, currently in use for storage and sale of refrigerated meat.  Smithfield is now the last-remaining central London wholesale-only market.  Borough has a small wholesale market but is now mainly retail; Billingsgate has moved to Poplar, Covent Garden to Nine Elms and Spitalfields Flower Market to Ilford.  Billingsgate and Nine Elms are now facing major redevelopment because they now find themselves in the middle of new building projects.  Once Crossrail is complete, Farringdon will the a highly connected railway station linking most of London’s airports.  It is difficult to see how Smithfield can survive in such a valuable part of the City doing something that does not particularly need to be done in the heart of London.  Once it had an underground railway delivering cattle direct to the market; that disappeared during the blitz and was never rebuilt.  Now it is dominated by early morning lorries.  It is a bit of a transport disaster in the midst of what will one day be an amazing transport interchange.